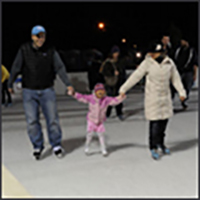 This post is going up on a day when it's in the single digits, so at least for now we know that ice has finally formed at the rinks! There are lots of great ice skating rinks in the city and suburbs, including many at the local park districts.

Below are our picks for some of the best family friendly outdoor ice skating rinks. Bundle up, lace up your skates, and get to it!

Ice Skating at the Rink on Wrigley
Through March 3
Wrigley Field, 1060 W Addison, Chicago
For the fourth consecutive year, an ice skating rink will welcome skaters to the Friendly Confines of Wrigley Field this winter, thanks to the generosity of the Ricketts family and Chicago Cubs Charities, the City of Chicago, the Chicago Park District, local businesses and community groups. Hours vary. Admission Fridays-Sundays is $10 per adult, $6 for children ages 12 and under. Skate rentals Fridays-Sundays are $10. Admission and skate rentals are half price Mondays – Thursdays. Learn more >

Ice Skating at Midway Plaisance Park
Through February 24
Midway Plaisance Park, 1130 Midway Plaisance North, Chicago
This is a beautiful outdoor setting for skating. Midway Plaisance Park is laid out with long vistas and tree lines at the turn of the century, the "Midway" between Washington and Jackson Parks, followed the vision of Frederick Law Olmsted, minus his impossible dream to create a Venetian canal. $6 skate rental; admission free. Food concessions are available. Regular hours are Sunday – Friday, 12–7 p.m. and Saturday, 1-9 p.m. Learn more >

Skating in the Park at MB Financial Park
Through February 24
MB Financial Park in Rosemont, 5501 Park Place, Rosemont
The lawn at MB Financial Park at Rosemont will be turned into an NHL-sized outdoor skating rink for the winter months and visitors can skate under the lights for a magical experience during the holiday season. With festive music, refreshments, convenient on-site skate rental for $8, free parking (with validation) and more, this ice rink, presented by the Village of Rosemont, offers fun for the entire family. Hours vary, see web site for details. Free. Learn more >

Naperville Centennial Park
Through February 15
Centennial Park, 500 W. Jackson Ave., Naperville
Naperville's Centennial park is lighted and open until 10pm. There are two hockey rinks and one free skating only rink at Centennial park, and a rink at Nike Sports Complex (288W. Diehl Rd.) permits broomball, with priority over open skating on Tuesdays and Thursdays from 7-10pm. In addition to skating, Naperville offers several sled hills, including Rotary Hill, which is lighted and open weekdays until 9pm and Friday and Saturday until 10pm. The sledding season runs through February 28. Bring your own skates. Learn more >

Skiing, Snow Tubing and Snowboarding
Through March
Villa Olivia, 1401 W. Lake Street, Bartlett
If you'd like some outdoor options other than ice skating, then check out Villa Olivia in Bartlett! At Villa Olivia, you can ski, snowboard and go snow tubing! It's one of the only places near Chicago where you can find these types of outdoor options. Call the Snow Phone at 630-540-4199 for more details. Learn more > 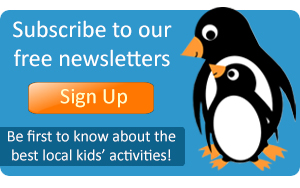